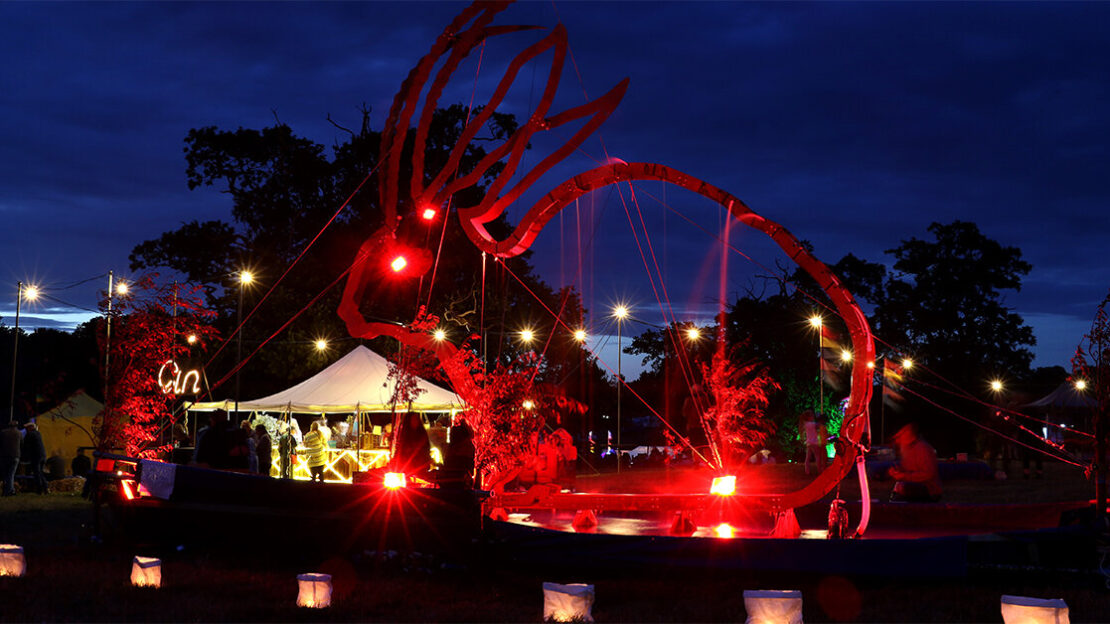 This month we welcome John Marshall-Potter, Co-founder of FolkEast, a 10K capacity festival which takes place in August in Glemham Hall, Suffolk, to talk about their journey to achieve as low a carbon footprint as possible over many areas of the event, with a focus on using the advantage of being a truly local festival as a key to cutting emissions.

John has worked in the live event industry ever since progressing from site and production management in the eighties to managing his own events in the nineties. He and his wife Becky set up FolkEast in 2013, now nationally acclaimed, the event is still overwhelmingly local.

FolkEast are delighted to be planning for their 2021 edition – having received funding from both the local council and the DCMS Cultural Recovery Fund after having to cancel their 2020 event. They created ‘Virtually FolkEast’ as a way of exploring how to create a covid secure event, and ran a 200 capacity pilot gig last August, to help them to develop the festival safely for this year.

“We set out from the start with FolkEast to have as lower carbon footprint as possible over many areas of the event.   One of the areas we have done well in is using “local.”

Except for the main stage P/A, all the event infrastructure comes from Suffolk based companies. The majority of our stall holders are local Suffolk based, there are about four of what I call Festival stalls that do the rounds, but we try to keep the local theme going as much as possible; all of our beer, cider, gin, whiskey vodka and white and rose wine is Suffolk produced, as is around 85% of the food on offer.

All of this helps to not only cut down road miles, but it keeps the money circulating in the local economy.

We have been using intelligent generators since 2016 (the company is based seven miles from site) this has made it possible to not only cut down on fuel used, but also cut the amount and size of sets needed to power the site. In addition we have one stage that is fully solar powered. We are currently in discussion with our power company to switch to gas powered generators in 2022.

The one area we are still not doing as well as we should is waste. This is mainly to do with our local authorities’ methods, which is to send everything to an incinerator, so although we separate out plastic from general waste it all ends up in the same place.

In 2019 we banned single use plastic on site and nearly all of the food traders use biodegradable packaging and cups etc. so we had far less plastic to dispose of but still not the end result we wanted. So, we checked out several local private waste companies and found one that really does recycle everything possible from the waste (we went and watched the process!)

We would have used them for the first time in 2020 but we hope to use them this year. The only problem I foresee is that the new waste company is happy for us to put everything into the same skips, as they sort it at base, which will be cheaper for us, but we will need to find a simple and informative way to let the public know this, as we don’t want it to look like we are not trying.

We have a good water system on site that is tested throughout the weekend and in 2019 we introduced a large water chiller into the arena for people to fill up their bottles.

This year we are planning to introduce washing up stations to encourage the public to use their own plates and cutlery at the food stalls, which again cuts down on the waste generated.

Luckily, our audiences seem to generally want to participate in helping to improve the events sustainability.

In Suffolk we have a council backed organisation called the Suffolk Carbon Charter, which is a great way to measure the progress we make each year. We were awarded the Silver Charter in 2014 and in 2018 we were promoted to Gold for showing an improvement each year.” JMP

This guest blog originally appeared in our February 2021 Vision: 2025 newsletter. Sign up to receive monthly event sustainability news, case studies and guest blogs direct to your inbox using the form below.