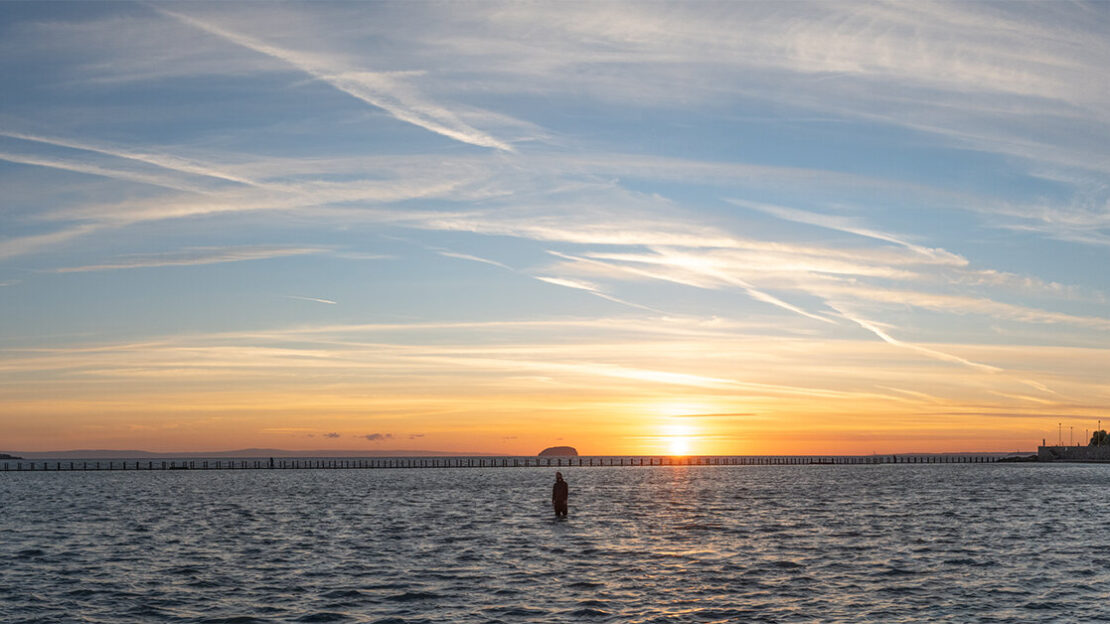 Vision: 2025 talked to Paula Birtwistle, Green Champion of Culture Weston, about running sustainable events in Weston against the backdrop of the COVID-19 events desert.

Having worked for Culture Weston as a freelance production manager and introducing a range of sustainable initiatives, Paula was appointed to incorporate sustainability into all of their work earlier this summer. Paula delivered two events successfully and sustainably this summer: ‘Loves Live on the Lawn’ in August, was a socially distanced COVID safe gig for 250 people with headliners The Magic Numbers and Ben Ottowell from Gomez, and an outdoor theatre show called This Crossing in September (pictured).

In this guest blog Paula gives us the detail on the trials and triumphs of running one event solely on solar power, one off grid, and how they worked to keep all other environmental impacts minimal.

“We devised the ‘Loves Live on The Lawn’ show with independent local café and music venue ‘Loves’. All our other events had been cancelled, but we were determined to have one show this summer. The council was fully supportive.

Our ethos was to be as green and as local as we could. All locally sourced food from a woodfired pizza oven (Pizza & Puppets), local bar with local drink. We kept it simple, for local people and encouraged people to walk or cycle. We used a solar powered battery cell for all power, had a couple of water containers and asked people to bring their own refillable bottles.

I’ve been keen on using solar powered batteries for two decades, having developed my own system that I took touring round Europe with sustainable cabaret company, ‘Cirque Idyllic’. Three children interrupted progress, but I’ve been working with Johnny Palmer of Pytch in Brislington. He’s developed SolCell, a plug and play, seven and a half kWh cell system to provide clean, sustainable power, via a managed network. It’s a lithium ion battery and is very reliable and easy to monitor. Over the past two years I been active with XR, including a long stint on Waterloo Bridge April 2019, with a solar powered stage and things have really moved on with the technology.

It was quite a close call for us on the ‘Loves Live on The Lawn’ show, where we had four bands. Unintentionally, we ran it down to 1%, which old systems would not have allowed you to do (a bit like mobile phones stop you doing video at 5%). I’d rather not have tested it quite so close to the wire – but it did us proud. We monitored constantly and when we realised we were using too much power too quickly, we liaised with the bands technicians, who were totally on board, reduced the load and we got through the whole set and the derig . . . just!

I’ve got used to doing solar powered sound, but the lighting was a new element.

With COVID we had to be very careful with the volume, so we went for a distributed system, with lots of speakers spread into the audience, meaning we didn’t have to blast it. It was probably over spec’d on pa, with a double 18” sub, which delivered a great sound. The lighting company had ‘thrown in’ some additional lights as a goodwill gesture (guess they had plenty on the shelves) and that nearly tripped us up. We’d intended to be fully LED, but a couple of the units weren’t, added to which they were drawing power even when not outputting light, which took us a while to realise during the day whilst programming. They were a great effect – but I only let them use them for one song!

We could see the charge of the cell going down and I realised we wouldn’t make the end of the headline set, so it was a bit of a stressful moment, when at the end of the first song I was staring down the barrel of losing the show.

But the tech team reacted quickly, reduced the draw, and we made it though the whole set, looking and sounding fabulous. The Magic Numbers went down a storm – in such a lovely intimate setting.

We backed up the lighting with 18 pre-charged (with solar) battery WELL fit lights around the site and in the portaloos! These were colour controlled from the desk so really extended the rig without using more power.

We’ve tested the SolCell system and I think it delivers more like 10 kW hours rather than the specified seven, thankfully!

The other event we ran, ‘This Crossing,’ was a low impact outdoor theatre show. We used the sun as lighting – timing the show with the sun hitting the water behind the stage in the last minute of the performance, to great dramatic effect. Sound was via Silent Disco style headphones, which draw milliamps, and we used the natural setting as the scenery.

I think we’re going to gear towards more local, small, experiential, immersive events in the future.

The key to running a low impact event is to design and plan the systems. Look at the event and the venue and make use of the setting, to shape the content and audience experience. Do we really need to be running a load of fridges, or can we keep drinks cold in ice buckets? Start off by using the minimal amount of stuff and ask the audience to bring their own. If you’re local that also means there’s hardly any transport.

It was really gratifying to deliver these events given the current situation – and we are already planning the next ones, hopefully something exciting with lights for winter, through to our award-winning outdoor event Whirligig next year.”