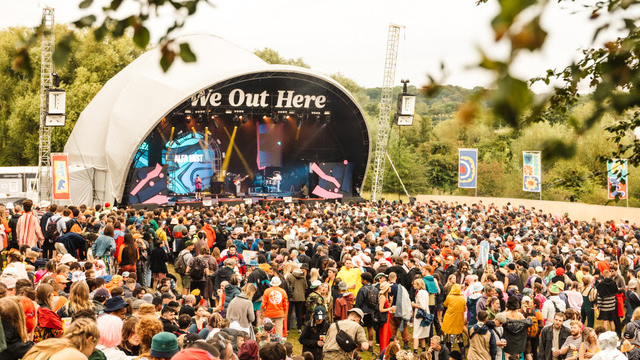 This month we spoke to Iain Mackie, director and founder of A Live sound LTD and UK distributer of Danley’s Sound Labs speaker systems, to deep-dive into the audio technology that made We Out Here festival Director, Gilles Peterson, describe the event sound as, “crisp and powerful,” and made him wonder, “How can so much sound come from so little?”

In this guest blog, Iain shares how Danley’s technology cuts environmental impacts and costs at events; with less kit to transport, less power consumption, less install and labour requirements and fewer people travelling to a venue for setup – all while delivering outstanding audio.

As well as founding A Live Sound Ltd, Iain has worked as a Technical Production Manager, Sound Engineer, PA company owner, and wearing a dozen or so other hats in the industry over the years too. A passion for high quality audio was born early when seeing On U Sound System’s Bim Sherman and Adrian Sherwood in the mix many moons ago, where Iain worked out the real talent at the gig was the people behind the desk. Iain came across Danley Sound Labs loudspeakers a few years ago and started using them in the company’s rental inventory. After a year he decided they sounded so good he bought the distribution company in the UK.

“Many festival organisers are looking at ways of reducing their carbon footprint; most look toward the energy source and how they can swap from diesel generators to a more sustainable source like battery, wind, solar, hydrogen or biodiesel. Whilst this is definitely a future direction of travel, less attention is being given to cutting the amount of electricity required to run the equipment on the stage by simply having more efficient speakers, lights, amplifiers, mixing desks, and all the equipment required for the show to be spectacular.

The technological advances I’ve seen in my 25 years in the industry are nothing short of a quantum leap, but many of the technologies we use in the audio world are not particularly efficient in terms of amperes of electricity required to SPL output of the system. I’ve also seen a rise of larger and larger productions and a corresponding rise in the number of trucks needed to carry more lights, audio and now LED screens to arena shows and festivals. I have often wondered if that’s the right direction of travel and how we make it sustainable? It’s a question I’m sure many of us are asking.

When I initially made the move to Danley it was due to being so impressed by the product: incredible fidelity and astounding SPL produced from so few speakers, and the subs which are incredibly efficient and musical – I’m a big fan of subs, some may say obsessed! When I found out the speakers BC range was designed to noise cancel a chinook helicopter, I was all ears.  I realised that using fewer speakers for any given audio field would obviously bring an environmental and cost benefit in terms of reduction in transportation, amplifiers, crew and cable, but I was totally taken aback by the tiny electrical draw that was needed to run such large arena systems.

After we switched to Danley to deliver the sound for the same arenas we used to do with line array boxes, we noticed a remarkable decrease in electricity usage: in arenas where we had previously used a 125×3 Phase to distribute the electricity for audio we were now using a 62×3.

In summer 2021, we started to measure the electrical draw on the Front of House (FoH) systems we deployed at events.  As an example, at We Out Here Festival, the main FoH system was entertaining about 10,000 festival-goers and ticking over at between 15-20 amperes draw.

Earlier in my career Macro Tec VZ5000 amplifiers were ubiquitous. These are 2 channels not 4 channels and would draw about 12-20 amperes each, so to match the Danley equivalent in the above scenario you would have 20 amplifiers drawing a combined 240-400 amperes whereas we can now entertain 10,000 people ticking over at under 20 amperes for the whole system.

How is such a small electrical draw possible for the speakers?

It’s actually a multitude of savings in efficiency. Danley’s large format Synergy Horns produce about 11db of acoustical gain compared to traditional speaker design methods, meaning that electricity required compared to audio output is very efficient. 11db may not sound like much but in reality 10db is where most people perceive a doubling of loudness, so just the use of a large format synergy horn doubles the volume compared to other loudspeaker design methods. Double the volume for no more electricity in, what’s not to like?

As well as the loudspeaker efficiency, there are other electrical savings to be had, like the sleep mode on the Danley Linea Research amplifiers.  Overnight, when the equipment is traditionally left on to keep out moisture and rain, the amplifiers require 4.5 watts so the 10 amplifiers running the main stage above required 45 watts between them – much the same power as keeping one lightbulb on. That’s ten 4-channel amplifiers, which when on full power can individually produce 20,000 watts of output power to the speakers, using just one lightbulb’s worth of electricity overnight. This allows us to swap to a tiny generator overnight and the show set can be powered down saving a lot of fuel, generator hours and carbon. Even when the amplifiers are on but with no music present the amplifiers only draw 195 watts or less than one ampere each.

You can read a case study of the sound production at We Out Here festival 2019 HERE.

In 2022, Danley Distribution is working toward a carbon-free future for all its business activities and is building a large solar install at its new purpose built HQ in not-so-sunny Scotland. We are also launching an on-site shop with Danley hi-fi and recording studio products to a select few festivals and will be running the shop on batteries and not diesel in 2022. We hope to scale this technology up to larger and larger stages with our partners in power production in the coming years.

Find out more about Danley Distribution

This guest blog originally appeared in our January 2022 Vision: 2025 newsletter. Sign up to receive monthly event sustainability news, case studies and guest blogs direct to your inbox using the form below.